Neuman Documentary to Premiere at College of the Atlantic 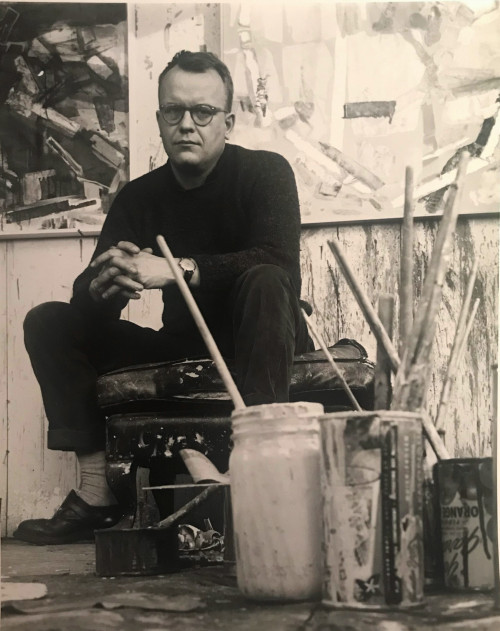 Join College of the Atlantic for the premiere of a new film about modernist artist Robert S. Neuman (1926-2015). Pieces of the World: The Art and Life of Robert S. Neuman gathers in-person interviews with scholars, family, and friends, archival and personal photographs, and images of numerous artworks to create an intimate and compelling portrait of the longtime Mount Desert Island summer resident.

The showing takes place in the Davis Center for Human Ecology on Wednesday, August 3, at 5 p.m., and is accompanied by an exhibition of Neuman’s artwork and archival photographs that runs until September 4, also in the Davis center.

Neuman embraced the tenets of modernism early in his career and devoted the remaining seven decades of his life to an exploration of modernism’s visual essentials — an exploration infused with abstract, symbolic and occasionally overt references to places and people familiar to the artist. The film tracks Neuman’s early commercial success with Pace Gallery and Allan Stone Gallery and his efforts to balance his studio practice with teaching appointments at institutions including Brown, Harvard, and, eventually, Keene State College, where he retired as chair of the art department.

The film also looks at Neuman’s personal life: interviews with family members, friends, and colleagues reveal his long connection to Mount Desert Island, where he spent summers for nearly 50 years, his combined sensitivity and drive, and his ability to tell a humorous story at his own expense.

The film was produced by the Estate of Robert S. Neuman, with underwriting from Keene State College. It was written and narrated by Brian Wallace, curator of the David Sarnoff Collection at the College of New Jersey and assistant professor of Visual Communication at Landmark College. Eric Stewart managed post-production and editing. Former Thorne-Sagendorph Art Gallery educator Shari Osborn provided the film concept and initial interviews, and Anna O’Brien (Keene State College Class of 2020) was a contributing editor.

A young Army veteran and illustrator hailing from Kellogg, Idaho, Neuman was — as he admits in the film — shocked by the West Coast abstraction he saw upon his arrival in postwar Bay Area California to attend college. Rather than turning away, he quickly embraced these challenges, arranging to study with leading émigré proponents of modernism and traveling to Europe with the support of Fulbright and Guggenheim fellowships to explore the movement’s roots.

Adopting a serial approach to his art practice, Neuman sought to define and resolve artistic contradictions in successive bodies of work — groups of paintings, drawings, or prints that sometimes extended over decades. The film includes footage of artists, collectors, and scholars describing Neuman working on multiple paintings simultaneously as he searched for related but unique visual solutions to the formal and material questions that so preoccupied him. Over time, as interviews and artworks included in the film reveal, Neuman’s works incorporated emblems of — and overt references to — places and people the artist had encountered. Neuman was verbally cagey about his artistic philosophy — he used humor to deflect questions and looked to his artwork to give answers — but he does express great respect for the capacity to create what he described as personalized abstraction.

Pieces of the World: The Art and Life of Robert S. Neuman brings together a range of voices to create an appropriately complex picture of an artist who used the language of a global art movement to explore uniquely personal concerns.

College of the Atlantic’s annual summer event series, including Coffee & Conversations, lectures, screenings, and Summer Institute, offers free presentations, salons, and art from July through early September. The summer series is underwritten by the College of the Atlantic Champlain Society. This event is open to the public; registration is not required. Learn more at coa.edu.